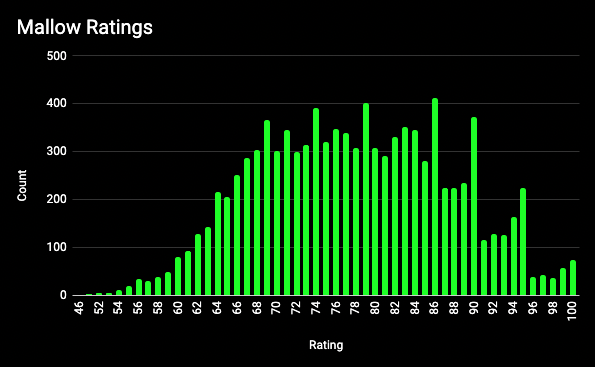 Distribution of the Mallow Ratings. The Ratings are indicative of the technical skills of this Mallow. Higher is better.

Broker - 1099's
This byoa draws a series of 1099 US Tax forms each time a new block is mined. The amount of tax forms is variable based on the variation of the byoa. The "Ultra" variation will draw one 1099 for each and every transaction in the block, while the base variation will do one form per every 15 transactions.

Why 1099 US Tax forms? At the time of the drop there was regulation going through Congress which would have been hostile towards POS and crypto in general. Effectively making anyone operating with Cryptocurrency a broker. This byoa is a fun visualization of that ludicrous concept.
Accessiblity
The Accessibility byoa exposes 3 methods around accessibility on websites: Dark Mode, Color Blind Correction, and Neumorphism.

This byoa is meant to show an example of real good that can come from a fully interoperable byoa system. Where someone who has a particular need - whether health or otherwise - can feel confident to have the tools they need wherever they go.

We are excited about the future of more robust byoa tools like Accessibility.
1559 - Burning Ether
With the launch of EIP-1559 at the time of the drop, this byoa is a fun visualization of how much Ethereum is burned with every block. It shows the amount burned, as well as cool "Doom" flames which rise up from the bottom of the page.

There are four variations of this, each being a different flame color: red, purple, green, and blue. Blue is the rarest flame.
Cyber Punk
In a multi-substrate byoa world, your byoa nfts will travel with you from web3 applications to 3D metaverses. The Cyber Punk byoa is representative of that potential futuer in a "Ready Player One" type of goggled display.

The goggles are transparent and show you the content on the page as you move the mouse around. And they come in four variations, each of which are different rim colors: black, bronze, silver, and gold. Gold is the rarest.

This byoa visualization makes it so easy to get excited about a real sci-fi future of owning your own experiences wherever you go.
Merger Value HUD
The Merger Value HUD attempts to show a rough estimation of how much Ether will be saved from going to miners after the Ethereum 2.0 Merger.

It's a cool picture of a simple sci-fi-esque graph overlay on the page. It sources its data in real time from Ethereum block transactions.
Social Profile
byoa has the opportunity to turn any page into a social app. The Social Profile byoa is a simple example of this which fetches any NFTs the connected user has from one of a few popular NFT projects, including: BAYC, Pudgy Penguins, Royal Socient of Players, Sorare, Crypto Cannabis, and Artblocks.
To The Moon
Let's go To The Moon and HODL Ethereum! That's what this byoa represents in a meme-like fashion. There are a few variations of images which bounce like screensavers across the screen while displaying different phrases such as "TO THE MOON!".

The rarest variation is a photo of Vitalik doing as such.